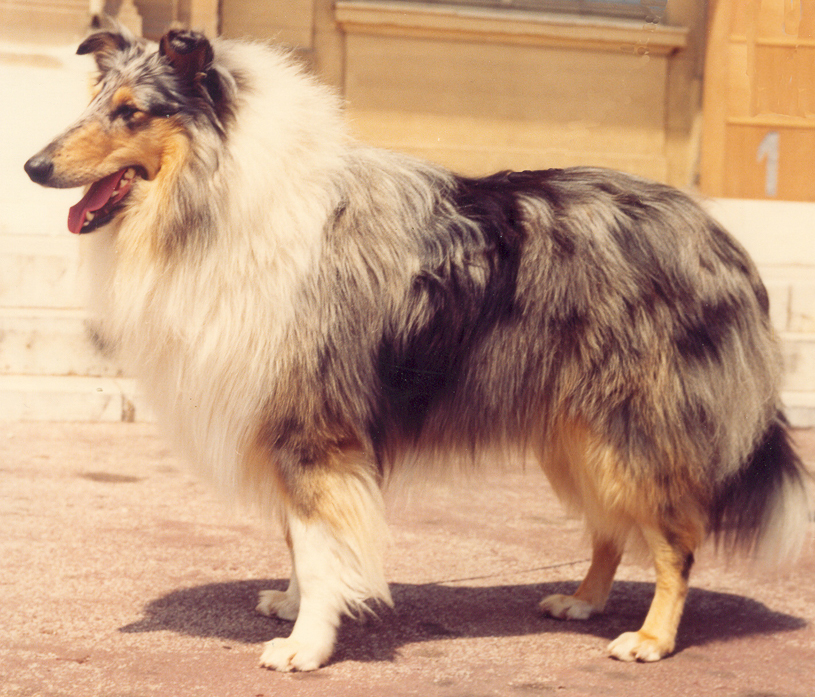 BEST IN SHOW WINNER International Champion Ringleader Blue of Rainshade was one of many puppies we exported, but wish we had kept! This confident, colorful puppy was the “ringleader” that shined among his beautiful siblings. In 1980, we exported him to Switzerland as a show prospect. He was four months old and full of promise. Ringleader became an immediate favorite. Everyone adored him! He dominated the show scene and defeated the top Collies of the day, in several countries. Ringleader quickly obtained his Swiss, Italian, Monacan, and International Championship titles. In the limited time he was exhibited, he remained undefeated. He earned BEST IN SHOW, 5 CACIBs, 5 RCACIBs, 13 CACs, 2 RCACs, in France, Italy, Switzerland and Monaco. Princess Grace presented Ringleader his Monaco awards shortly before her tragic accident. Unfortunately for the Collie world, Ringleader’s owner did not have a Collie breeding program, so he was never used for breeding, nor was he offered at stud. The good news is that Ringleader’s genetics were not entirely lost. Ringleader’s full sister, Rainshade Alice Blue Gown, remained here at Rainshade Collies throughout her long, happy life. Alice became one of the foundation pillars of our breeding program. Most of the Collies at Rainshade Collies today trace back as far as twelve generations to Rainshade Alice Blue Gown!